If release coatings are critical to any aspect of your production, you are probably wondering why somebody hasn’t developed a coating that doesn’t have to be reapplied as regularly as you change your socks. It’s frustrating, costly, and simply put, a major inconvenience. Well, guess what?  Somebody has.

Whitford Corporation’s Xylan® XLR nonstick coating maintains its release properties 50 times longer than whatever coating you’re using right now. Full disclosure, we have a working relationship with Whitford. But that doesn’t change the fact that their Xylan XLR has revolutionized the world of nonstick coating.

You’re probably thinking this is just a shameless plug for Whitford from a coating company that wants to keep them happy. Shameless maybe, but this is why:

This means that, regardless of your industry or need for a nonstick coating, Xylan XLR will outperform what you’re currently using. You have to recoat less often, saving you money, production time, and the headache of keeping track of which parts are out being recoated and which are ready to be used.

If you need further convincing, here it is. Eterna®, Xylan XLR’s sister product — used primarily on consumer cookware — has undergone extensive dry-egg release tests. As you know, the previous leading performance for nonstick coatings during this test is 33 releases. The guys at Whitford who developed Eterna had to stop their testing at 350 releases because they needed the results for a publishing date. Another testing group eventually arrived at a number of dry releases upwards of 750. Don’t believe it?  Here’s the photographic evidence, charts, and a good bit of technical detail.

The bottom line is simple. If you’re happy with the cost, time, and extra stress of dealing with the constant reapplication process, then that’s great. Just don’t tell your accountants and production managers about this article. But if you’re looking for a release coating for any part, in any production line, in any industry that will perform better than what you’re using, check out Xylan XLR, and get in touch with the guys at Whitford. 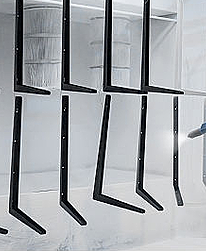